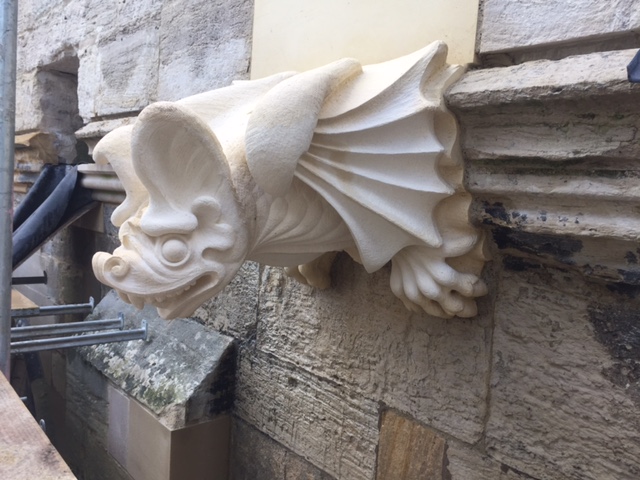 A new Gargoyle for Ripon Cathedral

The Brief
The brief was to create two new works of art to grace the Cathedral parapet a piece sympathetic to the history and style of the building and which conveyed the spirit and intent of the medieval stone carvers’ work.
The tender submission included concept drawings and models together with a statement describing the influences and what made the piece’s design fit within its setting.

Concept:
After extensive research Tom based his unique design on the Daubenton’s Bat, an endangered species local to the Cathedral on the River Skell. This particular species with its large hairy toes and curious dynamic forms found on its ears lent itself well to expression in the Gothic Style.

The natural features of the Daubenton’s Bat were abstracted with stylistic reference to the existing Gargoyles and the Gothic style in general.

Drawings
Sketches and drawing are the quickest and most direct method of experimenting and expressing ideas; below is an early concept sketch of the gargoyle design.

Full size Clay Model
Once the concept and design was decided upon a full size clay model of the gargoyle was worked to ensure every detail had been resolved.

Mould Making/Casting
Once the model was resolved and the clients satisfied, a silicon mould of the model was fabricated. The model was then cast in plaster to create a stable model or ‘maquette’ to serve as a guide for the carving process.

The Carving
Tom chose carried out as much of carving work as possible with hand tools leading a more sympathetic approach to finishing the stone in keeping with the original Gothic Craftsmanship. Carved from Highmoor Magnesian Limestone the gargoyle was very well received and now springs from its roost on the North Choir Aisle as a fully functioning overflow for rainwater.