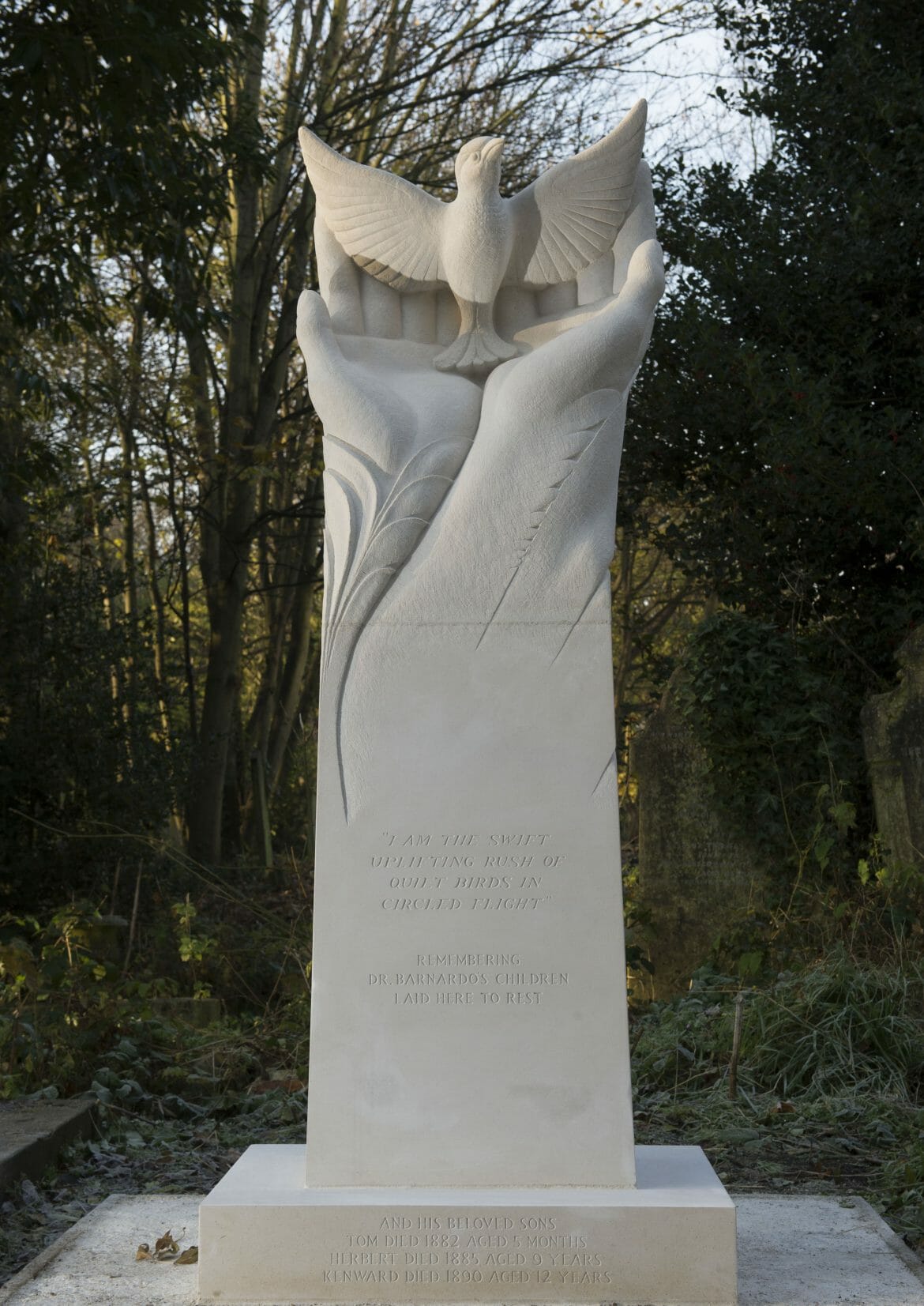 The Brief
Tom Nicholls was asked by the Barnardo’s charity to design and carve a public memorial sculpture to commemorate 513 children in the care of Barnardo’s who died and were buried in unmarked graves in the Old Bow Cemetery (now the Tower Hamlets Cemetery Park in east London), between 1876 and 1924.
The brief was to create a concept and design for the memorial which captured the ethos of the Barnardo’s Charity with its roots in the East of London while being sensitive to the context of its site in the Tower Hamlets Cemetery nature reserve.

The Concept
After researching the charity and its history, Tom presented his concept proposal to the charity by producing a small wax maquette of the sculpture along with an explanation of the concepts and thought processes behind the design

The design depicts a pair of hands releasing a bird into flight, symbolising Dr Barnardo and the Charity’s invaluable work caring for and freeing children from poverty and hardship.
The hands are one of the most expressive forms for conveying human emotion, here representing the love and care bestowed on the children in the charity’s care. The hands gently encourage the bird to freedom, taking to the sky to fly freely out into the World.
The hands also represent Dr Barnardo’s strength and kindness in the face of opposition, reaching to the sky symbolising his inexhaustible enterprise, forward thinking and pioneering spirit.
The bird represents the children, freedom and an opening to the future. They have often symbolised imagination, transcendence, divinity and freedom from materialism and physical constrictions.
In folklore birds were often taken as signs of renewed life, and of a transition between life and death, particularly poignant given that this sculpture is partly a memorial to the deceased.  The cemetery; a vibrant nature reserve alive with bird song seemed a perfect setting for the sparrow taking flight depicted in the piece.
The bird is loosely based on the Sparrow, a bird linked to the poorly nourished in the East of London. Hence “Cockney Sparrow”, or “Sparra”, their small size, sprightly energy and the way in which they gather and chatter makes them a wonderful metaphor for the children of the East end.
The sculpture’s slight twist spirals up towards the sky, coiling designs often symbolise progress, evolution, growth, expansion and energy radiating outward which are all expressing the ethos of Barnardo’s Charity.
The monument stands as a pillar of strength,  celebration of the immense achievements of the Barnardo’s charity in the past and a symbol of hope for the future.

To find out more Download the booklet courtesy of Barnardo’s.

Development of the concept
To develop his sculpture Tom produced drawings and sculptural studies of his own hands and of taxidermy sparrows at the Horniman museum in South London. These studies helped him to develop his wax concept maquette into a half scale wax model which he then used as a guide to carve the full size stone version.

Carving
The monument stands 2 Meters tall, hand carved in Portland Stone. The quote on the base was chosen by the Barnardo’s charity, a verse from the poem ‘Do not stand at my grave and weep’ by Mary Elizabeth Frye.

The memorial was unveiled in 2016 by Jean Clarke and David Barnardo, Dr Barnardo’s great Nephew. The sculpture was well received and the unveiling of the sculpture was covered by the BBC, ITV and various national and local newspapers.